Short meaning:  The Ace of Cups shows you have a strong initial attraction or affinity with someone or something triggering happiness and excitement. It could indicate the possibility of a romantic involvement or new friendship, or the desire for a relationship. 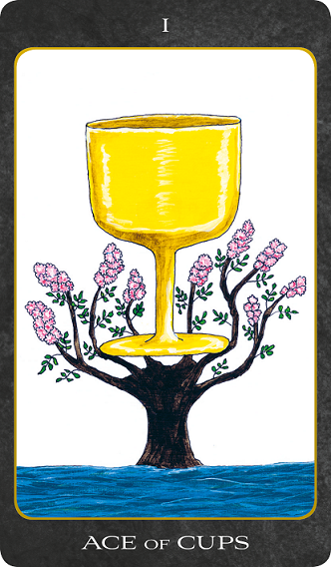 In-depth meaning:  The Ace of Cups can be a happy or sad card and tends to represent the Subject’s emotional response to a situation rather than an actual event. This is a highly emotional card and whatever the Subject is feeling, they are feeling it intensely. This level of emotion can drive people to do things they wouldn’t normally and, so, it is important for the Subject to think carefully about what they want to achieve before they act on it or say anything. It is important to look at the cards chosen alongside the Ace to determine the particular circumstance.

In its more negative forms, the Ace can show where the Subject is feeling lonely and wanting some form of companionship. In its more positive forms it can represent real affinity with someone or something, and those overwhelming first flushes of attraction and love.

Notes on the image:  There is a huge cup emerging from a tree, which is in full bloom, growing in the water.  The tree represents the Tree of Life (which gave immortality to the first couple, Adam and Eve, in the garden of Eden).  The blossom indicate happiness/successful nurturing/contentment/beauty/nature – all the things that we enjoy and need in life.  The cup is large, indicating a massive surge of energy around emotions – and can be taken as being ‘out of proportion’ in terms of relationships eg the desperate need for a relationship – the massive infatuation in the first flush of a relationship. But it could also represent absolute and utter true love having a major impact on the Subject.  The tree grows out of water, the element associated with Cups, and, in this case, the water is relatively calm which indicates there is no significant negativity within this card.